The universe has been telling me to start blogging on here again, so I’m finally gonna listen! Two days ago I watched Captain Fantastic and it changed my life, so I had Eddy watch it and it changed his too!

My whole perspective has also shifted like crazy over the past couple months, and even the past 2 weeks because I also just got back from a trip to Antarctica!! Both other posts entirely…

Today I cried. A lot.  And that’s what finally pushed me to start again. I also can’t go into full detail about this, because I’m still processing… All I can say is that I feel like I’m starting to really embrace this whole “life as an ayahuasca ceremony” thing I came up with as a tool for myself. Thinking back to how I felt during a ceremony… this almost “excitement” for the pain that was to come, knowing that it would be healing… this is probably another post entirely as well. Moving on.

After ACTUALLY doing Ayahuasca, I wanted to discount the bipolar label entirely. The experience at Dreamglade really opened my eyes to how Western diagnoses truly DO only address symptoms rather than the root cause of things, and offer only bandaids as solutions because people are so afraid to face the truth of who they really are. However, coming back to the states and trying to explain what I go through and how my mind works, I see how labels are pretty much just definitions that make things easier for people to understand. Unfortunately it also creates boxes for people to be trapped in, rules to adhere to, and excuses to be placed on ideas and concepts, rather than worked on and understood.

Considering I’ve been subconsciously trapping myself in boxes of my own doing for my entire life, I naturally wanted to get away from something like the label of bipolar. I wanted to focus more on healing, so I made another blog… but now I see that doing so was almost another form of “classic Elora escapism.”

I now see that bipolar doesn’t have to be a “label,” but an exploration.

What does bipolar actually mean? At some point, you answered questions for someone you don’t even know (your doctor/psychiatrist) and they made a judgement about you, without even knowing YOU, or what you’ve BEEN through in life. Yes, there’s a reason that certain traits and symptoms fall under that category, and honestly… it’s nice to know that we highly emotional, EXTREME people are not alone. However, we can’t just use that as an excuse for our behavior once we find out that we fit under some umbrella term. But identifying as “bipolar” and committing to understanding what that means to ME… now that’s PLENTY healing. Rules are meant to be broken, and I feel like what I’ve been discovering about myself is actually HELPING, WITHOUT meds. And it’s something we can all do.

It’s a shit ton of hard work, terrifying, and involves a lot of pain… but isn’t that life? I’ve felt the numbness, and to me… that’s not living.

A lot has happened in the past 6 months. I got married in Hawaii despite the threat of a hurricane, had a spiritual experience in Kauai during our honeymoon, was reborn in the Peruvian Amazon at an Ayahuasca retreat, and lived what I felt was an entirely new lifetime on a boat sailing around Antarctica for 10 days. Now that I’m back home in LA with no huge life changing experience looming on the horizon (well, except losing my job in 2 months), I’ve had to face what it means to stay put and stop running from my biggest fears.

After living this MOST EXTREME half year of my ENTIRE 30 year existence, I can now say that unfortunately… it’s what I needed to actually feel alive and begin to truly move forward. For the first time ever, rather than existing only in a scattered, painful cloud of thoughts, my brain might ACTUALLY be working! 😀 Sadly it’s also made me aware that this is the type of stimulation my brain has needed, and now I want to dedicate myself to learning how to be okay living WITHOUT such extremes… because damn it’s exhausting! And from what I learned while on the ship in Antarctica… not a lifestyle that I actually want anymore.

In addition to all these recent life changing events, I’ve become re-obsessed with the enneagram and archetypes, and it’s pretty insane how duality is EVERYTHING and EVERYWHERE!! I really resonated with this guy’s description of the Warrior Archetype.

In this video he MENTIONS bipolar dysfunction, and in his video on the “The Lover” he goes into more detail about it, with this chart that I absolutely love clearly illustrating those poles within all of us! 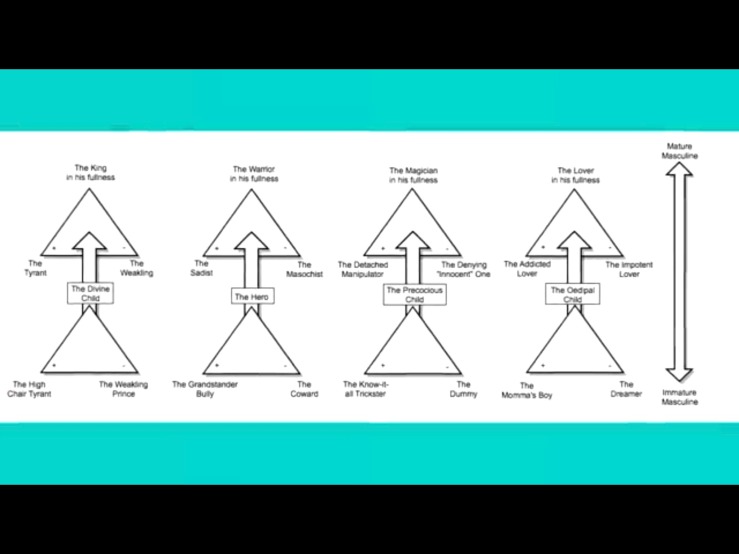 The only answer is to explore this dichotomy, the “bipolarness” of it all! But that exploration requires courage to face ourselves, and it is what we all must strive for in order to GROW, but also to move toward a better world. I’m starting to see that being sensitive to these extremes really does seem like a superpower, a clear gift and curse. The ability to embrace these gifts in their fullness requires an awareness, not only of the  joyous extremes and how those make you feel, but also taming that dark beast that exists to balance that. 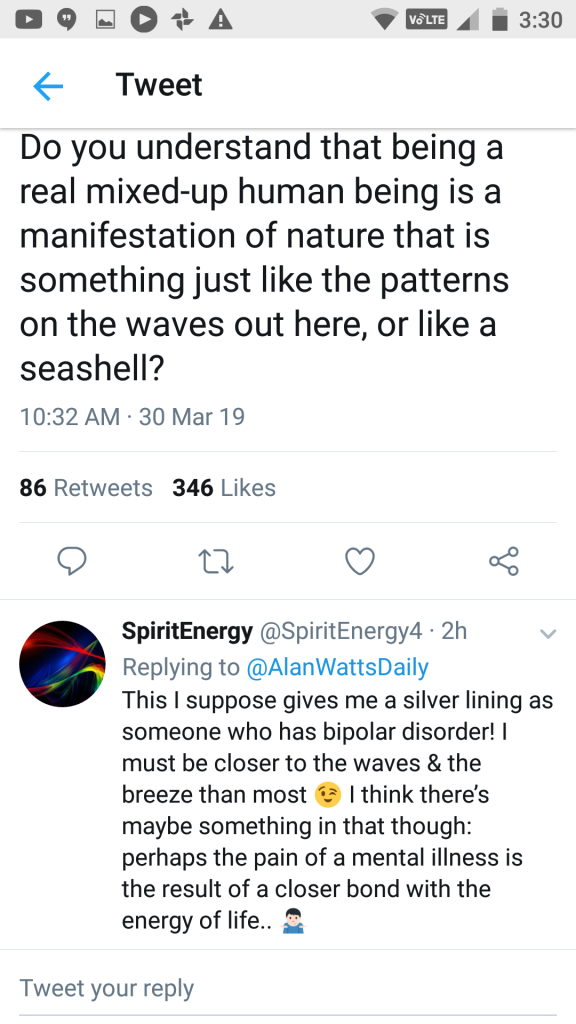 I absolutely love this tweet that a friend sent me 🙂 A “closer bond with the energy of life”… I would like to think so. Everyone’s minds work differently, but something that’s becoming more and more clear to me is that…bipolar minds allow us to feel SOOO so strongly that we experience a special kind of pain, but that pain can also be seen as fertile darkness from which the brightest of lights can emerge!

The brighter you shine, the darker the shadows.

There’s a reason so many of us kill ourselves… because it’s so much easier to do that than to live with feeling this way, and to know that whenever things are good, that crash is waiting just around the corner. But just think how STRONG we can be if we learn to fight it, and what JOY we can GIVE to the world!! 🙂 We feel stronger and deeper and harder than ANYONE ELSE… all we gotta do is learn how to lessen the crash!

Along with the bipolar, I am an Enneagram Type 7, and knowing that my learning and excitement come from stimulation from the external world, I’m determined to shift that stimulation to what I fear most — the internal world… all those demons I THOUGHT I had faced, but realize are still here every time I attempt to create.

I have learned SO MUCH about myself, humanity, and the world in these past couple months and am SO EAGER to share my findings with anyone who will listen! However…it’s a LOT and I have a feeling it’ll take longer than I think to figure out the best way to do that. Going against my nature, I’m finally trying to be patient and learn to see this internal unfolding as the next adventure to move me forward. It’s such a struggle to learn to trust your intuition and observe and follow where the extremes take you, while at the same time trying to tame that wild beast within, to a certain extent. ADVENTURE INDEED!

This site will be a perfect place to document that journey, because I am now accepting that I forever am, and will forever have, a “Bipolar Beastie.” Hell, maybe that’s how it is for all of us 🙂 It’s about time to start being proud of it!

Thank you to all my subscribers and people who have written comments to some of my posts…it means so much. ;___; Remember… you’re not alone, and it’s worth it to share your story. I’m struggling too, as are we all!! Embrace your beastie!

View all posts by Elora Lyda