So that’s what I mean by “enjoying life”– allowing yourself to feel this blissful, like everything is right in the world, even if it’s burning down around you.

“Now this is livin’!” – Me at this very moment (Wonder what it’ll be tomorrow lol…)

Dunno if I’m going manic or what, especially after what happened yesterday… but I dunno I’m just feeling really great all of a sudden. I think it started when I was working and thinking “I wonder if I can enjoy this” and then I realized that, part of what’s been wrong is that I NEED TO ENJOY LIFE and I’ve been CHOOSING not to this whole time! And it JUST dawned on me.

How ridiculous is that?!

I think… on good days like this for me… I can step back and see that life is just one huge game. I think it was as I was reviewing older posts and I saw this enneathought I posted. 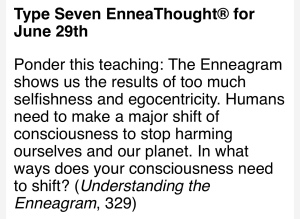 I am simply the result of too much selfishness and egocentricity, but to look at it and accept it… to KNOW that where I’ve come from has turned me into that… I can now just… let it go.

I wish I could see the enneathoughts for the other types for that specific one… because it shows me that we humans on earth, basically all we’re here for is to exist to provide examples for other humans to learn. I was looking back at my life today thinking “at what points do I feel like I’ve learned the most? And what am I learning from? I feel like I’m ALWAYS learning!”

And that’s because you learn from the world around you!  Yeah sure people go to school and value that sort of academic learning… learning more about how other people say the world works… but someone like me learns from doing. Learns from experiencing.

And I think that’s why I’m one of those “Apocaloptimists” they’re talking about, and Eddy is the complete opposite of that.

I’ve been following this “healer” path for a while, but I guess just realizing it’s a healer path since I’ve come back from doing Ayahuasca, even though I had been doing it all along.

You know, people say about mental illness that you can shift your perspective to see it as a “superpower” rather than a “flaw.” I could clearly see the obvious superpowers of bipolar — boundless energy, sometimes productive mania, generally more open with others — but one of the something I’m starting to become really aware of is the EXTREMITY of it all.

I guess I’ve been slowly becoming aware of this for a while, but it hit me really hard today! When I went to the Journey Home women’s retreat last year, Claire brought up the idea of a pendulum, and how we have to allow ourselves to swing all the way to each end in order to truly see ourselves and heal, but a lot of us are afraid to and only swing somewhere in the middle.

But if you live just in the middle…it’s true that you feel less pain because you have walls up to protect yourself, but is that truly living? Some would argue that not truly feeling life to it’s fullest isn’t, but I suppose some people would be ok with that in order to be safe. One of my friends literally told me so when I mentioned the pendulum — she did NOT want to venture further, which was shocking to me!

So that’s what I mean by “enjoying life”– allowing yourself to feel this blissful, like everything is right in the world, even if it’s burning down around you.

Lol I feel like I now understand this on a deeper level:

Yes, this is a good mood day, but it made me realize how much I value this “enjoyment,” and I suddenly started seeing that I was choosing to just look at certain things as “unenjoyable” when… that was only a perception I was deciding to choose.

But that’s just a habit right? A pattern? And something I realized today was the effect music can have on me… I never knew before, but I guess today I was extra sensitive, and I noticed that listening to mantra calms my mind down enough to simply enjoy the act of working.

And now having felt that enjoyment working, I can continue to chase that feeling to release dopamine and keep me entertained by something I previously disliked. And maybe turn THAT into a habit instead!

Of course this is just a hypothesis and I won’t know until I try it tomorrow and… I wonder if it can work even if I’m depressed. At least it’s a ray of hope!

Something interesting too is, I asked Eddy if he considers it a priority to “enjoy life” and he said no! I knew it! I don’t think it is for an Enneagram Type 5! To him it was more about “protection of life.” I wonder… what would YOU consider your “priority” of life? Yes, it changes… but I’m curious what it could be other than to “enjoy” it too.

ANYWAY LIKE I WAS SAYING!!! The extremity is a superpower because we as bipolar people ALLOW OURSELVES TO FEEL BOTH ENDS OF THE SPECTRUM!!!

I dunno how this is with other people, but at least for me I feel like I come alive in a crisis situation. Like… if everyone else is freaking out, I feel like I can keep calm and somehow make people around me feel better, even though normally I feel like I’m complete shit.

Yeah, it sucks to be on the low end but I’m betting that being in that dark place so much gives us a tolerance to it that only people with similar experiences have. And because we’ve been equally as far on the other, “good” side… (remember: pendulum) we’re able to stay optimistic because that feeling was SO GOOD that we’re constantly trying to get back there. Then once we’re there and people experience our true joy, they see that it IS possible… to feel that. And that’s one of the true beauties of life, isn’t it?

And THEN, when the world goes to this level of darkness, like it has, many of those people haven’t allowed themselves to feel enough pain to be ok with it. Like their tolerance is too low. But I suppose… being a hungry ghost to the extreme level — a “perpetually unsatiable 7,” the hunger trains you for… The Hunger Games. LOL.

“Lessons from gluttony”, if I’m not mistaken haha xD

I’ve noticed that people at these retreats and such that I’ve been going to are similar… they’ve gone through enough pain to make them seek an alternative path in life… a path that’s painful, but they don’t give up trying to understand — themselves and others. It truly is the path of healing, because once you heal yourself, obviously you’d want to pass that knowledge along.

And that’s what I’m vowing to do. Hopefully I can remember this… and come back to it.

We’ve all got superpowers! I’m so happy I feel like I’m starting to discover mine!

This is the song that helped you have this epiphany btw, good idea to maybe come back to it later when things go bad again. Ganesh is a great for you — “REMOVER OF OBSTACLES” — exactly what’s needed right now 🙂 Highly recommend this mantra if you wanna stop being stuck! I’m gonna try listening to it the whole time I work and see what happens!

View all posts by Elora Lyda